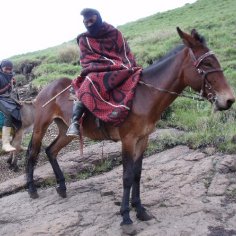 When I told people, that I was going to Lesotho, the most common reaction was a little confused expression on the other persons face – where is that, and why would anybody spend their holiday going to a place like that? When I then told that I was going with people, who would be looking at water tanks – then the majority would think, that I was at least a little crazy – if not a lot!

My first impression was – really no impression at all! We were quite late driving from Johannesburg, and it was completely dark, when we arrived at the border. About an hour earlier Karen and Karina told me “if we came here during the day, you could see the boring flat landscape of South Africa changing into hills and mountains, and it’s very pretty”. All I could do was saying – “well, I believe you”. But the next day I found out.

We were here to see how the water tank project was going, and on that next day we left Maseru and drove south towards Mafeteng. And we had some great views – it reminded me of old western movies, with the dry land and the tabletop mountains. And we even saw the local variety of a cowboy, with blanket and rubber boots.

I had heard a lot about water tanks before we left, and I was looking forward to see what they really looked like. And it was quite interesting. The area was very dry, and it was obvious, that the tanks made a difference. The houses with tanks had gardens, and those without just had dry land. The farmers all wanted to have a tank, and even those who already had one, wanted one more. Well it is easy to want a present, but here they have to do something themselves – collect stones and sand – so I believe that the wish is a real one. It is the kind of project, which I believe is the right way: not a revolution, but a small thing, which helps instantly and can run without the need for more money.

A few days later we went on another trip to see some more villages, tanks, gardens, chickens etc., this time to the south of Lesotho near Quthing. It was quite a long drive, and I was surprised to see how good the main roads are, compared to other African roads (it changed instantly (!), when we left the highway and went into the countryside and used more than 2 hours to drive the last 40 km.).

Another strange thing is that you see very, very few bicycles – almost none. Fortunately we had brought our hiking boots, and in the afternoon we made a trip up into the hills where – another surprise – we found some very large fields. We also saw, that some modern technology is coming very fast to Lesotho. Here, in the middle of nowhere, you could send an SMS!

So – what was the best of the whole trip? The best I think was, that when you travel like this, you get a chance to see what is going on behind the surface. As a ‘normal’ tourist you would never come to a village at the end of a gravel road, you would not see the university or an editorial office, and you would probably never taste motoho (one can argue if that is good or bad!).  I really think Lesotho is a great country, and hope to be back again some day.