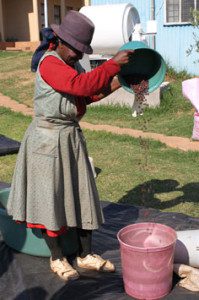 I am often asked what the population of Lesotho feeds on. The answer has often been a little under end because from the outside it looks like to some degree they feed on the same as us here in Denmark. They sit at the checkout at the supermarket, they serve in restaurants, are teachers, bank clerks, taxi drivers, pizza bakers, nurses etc. Not only in the countryside they have cows, sheep, goats, pigs and horses. They also have livestock in the middle of their capital, so agriculture must be added to “what they feed on.” On the trip I have been on in October 2011 we saw some dromedaries, which vegetated on the lawn by the Ministry of Agriculture. They don’t feed on them. They were not used for anything. They were a gift from Gaddafi!

One evening the bus with us ten participants arrived to Aloe Guesthouse in Pitseng. Cow herons were starting to find shelter for the night in a pair of tall pines, and Ibis were screaming themselves. We were hungry, and going to eat. We walked past a big white painted truck engine, which apparently was gratuitous besides a building. Outside the building there were some steel crates with chimneys on. I wondered about it, but forgot it quickly, as there was rice, stew and moroho on the table. Next morning when we went from breakfast, I got the answer to what it was. Not right away of course, but little by little.

First I saw some women come bearing some heavy white sacks. On them was written: corn, rice, made in China etc. Then a woman came with a large piece of plastic, which she spread out on the ground. Others had picked tubs and barrels, which were put on the plastic. A young woman sat in the shade nursing a tiny baby, and beside her she had a child who had almost learned to walk. Now all was ready to start work. The bags were opened and the contents proved not to be rice and maize. It was something reddish and brown. It was distributed in casks.

Then one of the older women took a dish and held it up high and began to pour the contents into a bowl, and the wind took some of the lightweight material away.

Another sack was emptied onto a steel table and a woman began to sort. The young mother had finished breastfeeding and the baby was tied to her back so she could work. She had both her children with her at work, and despite the fact that they both wept, she had to use her hands fast to sort. Now I had to go close to see what it was, they worked with. It was dried rosehip. Not the big fat ones, as we know from the beaches in

Denmark, but some smaller ones, resembling the wild rose hips, we use for Christmas decorations. Now the answer was there on what the truck engine and the strange steel boxes with chimneys on were for. This was obviously a place for the drying of rosehip. The women said they picked the rose hips in the countryside. They were used as a spice and marmalade. At the ongoing tour of the country all our eyes had now been opened to the fact that there are actually many rose hip bushes with delicate pink flowers. Rose hip can be added to “what they feed on.”